Two recent training runs have inspired this post, as I have run out of water after 21kms of running on each occasion. For one I only had another 5kms to get home without water, but the other was more challenging with 19kms still to complete. Running with Tylana, who was going back on a different route (only a few k’s away) she gave me her last 200ml of water to avoid me staggering home through the bush. Common sense prevailed and I called my wife to pick me up 6kms from home (13kms with no water when I was already tired and thirsty was enough.)

Considering I run with a 3 litre back pack, it’s clear that all the water is going somewhere, and at a great rate. But why has this suddenly become a problem? (and no, it’s not leaking!) 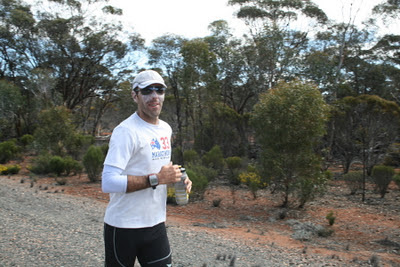 On the Sunshine Coast in Queensland summer is well under way, and with it comes the rainy season.  There are good points and bad to this. The good being the enjoyment of running in the rain (with fewer people about), the bad is running in the heat and humidity.

Since I had to withdraw from the GNW 100 last year suffering from pretty severe dehydration, a result of being a heavy sweater, I’ve taken to monitoring my sweat rate under different conditions. In a previous post I covered how to measure this and the value of know your sweat rate, and this post is a follow on to cover the heat and humidity variables in more depth.

Basically it’s reasonable to assume that your sweat rate will increase with temperature, but recent experiences of mine would suggest that humidity has a far more significant role to play in the process (assuming other factors such as effort are constant).

On a recent run of 2 hours over reasonably hilly trails I was sweating at a rate of about 1.8l per hour. It was a 29C day with a humidity of approximately 60%.  On a similar training run this week, I was sweating at 2.6l/hour, but the temperature was only 25C.  The key difference was that the humidity was over 80%. So a 20% increase in humidity caused a 40% increase in sweat rate, even though the temperature was 4C lower.

So why does humidity has such an impact?  Well there are a number of reasons, and some of which create a positive feedback loop, making the impact of higher humidity increase almost exponentially.

Firstly, the reason we sweat is to cool the body down. Your working muscles (all of them, not just your legs!) generate heat, and if this heat isn’t dispersed you’ll slowly cook yourself from the inside.  The way in which sweat is such an efficient way to cool down, is that the sweat on your skin evaporates it takes with it a lot more energy than by simply conduction. It takes advantage of a phenomenon known as Latent heat (You may need to refer to your school books for this!). Basically it’s why wet skin feels colder when you blow on it than when it’s dry. More energy is needed to evaporate the sweat, the energy being taken from your skin in the form of heat. [Enough of the science lesson] 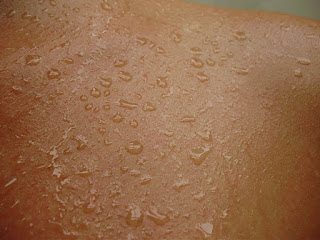 The trouble starts when your skin gets so wet that the layer of fluid is so thick that the cooling effect doesn’t affect your skin. When it’s humid, that is exactly the effect you get.  Not only that, but because the air is already saturated with moisture, the effectiveness of evaporation is diminished.

As a direct result of this, you don’t cool, you get hotter, and of course your body’s response to this is to sweat more in an attempt to cool you down more. And so the cycle continues. The only way to cool down is to reduce the amount of heat you are producing – to put it simply slow down, or stop! Of course you can do other things like a cold drink or eat an ice cream, but this isn’t always an option, and again, it isn’t as effective in cooling your body all over.

Another feature of high humidity, which is not something I’ve experienced on a hotter day with low humidity, is the impact on my ability to breathe freely.  On a really humid day it can feel like you’re breathing through a straw, similar to running at altitude where the air is thinner. It’s a different cause, but the same effect. When air is humid, carrying lots of water, there is less breathable air available.

This causes an increase in respiration rate, and an increase in heart rate, which requires extra effort, ending up with generating more heat – and heat that needs to be removed from the body. So again we’re back to the sweating scenario, and as it’s already humid, it’s going to cause more problems as I’ve already discussed.

So what to do about it?  Simply put there isn’t a great deal you can do, other than training and acclimatising your body to perform more efficiently in those conditions. In the shorter term it simply comes down to slowing down and reducing the amount of energy you expend, to slow the need to cool. Be aware of the early warning signs such as an increased heart rate, and slow to keep this within a normal range. I typically find that my heart rate will be 10-15% higher on a humid day, and have to reduce my pace and effort significantly to get it down to something closer to my normal levels.

So if I had to choose between the heat or humidity, give me heat any day.  At least you know when its 35C with low humidity, your sweat will evaporate and cool your body. When it’s humid you get no such luxury. 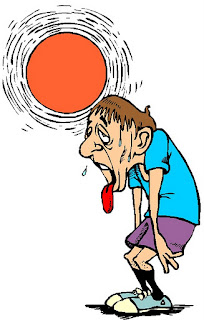 Obviously no matter how hot or humid it is, you need to be replenishing the fluids (and electrolytes) that you’re using.  Sadly, even though you can train your body to absorb fluids at greater rates there are limits (as detailed in the runner’s bible – The Lore of Running).  I seem to be able to absorb more than the max rates/hr (about 1l), but I put this down to being dehydrated and my body doing whatever it can to suck up whatever fluid is available to it. So in a hot dry environment, provided you had access to enough fluids, you should be able to keep going and keep cool. This wouldn’t be the case in a hot humid environment.

Once again it’s a personal experiment to see how your body behaves under different conditions, being aware of the signs, and know what to do to keep yourself going.

"The best moments usually occur when a person’s body or mind is stretched to its limits in a voluntary effort to accomplish something difficult and worthwhile."
Mihaly Csikszentmihalyi