From now on I’m going to being doing more of my reviews on video, so that you can see the products in action, and I can describe their performance real time.

So first up I’ve done a short video of a pretty tough hill trail I train on, whilst wearing my Linebreak Compression gear. Clearly I need to work on my camera skills as you don’t get to see much of the kit, but I’ll get better with practice!

I also cut the video short inadvertently, so I’ve added a few extra comments and a summary below, as well as some photos.

In essence, I’ve found all reputable compression gear to demonstrate a similar level of benefit from a performance and recovery perspective, both short term and long term. Linebreak is no exception to this, and I have the added advantage of having done a lot of KMs in their gear, giving it a thorough road (or rather trail) test. I’ve done over 1500kms in each of my tights, shorts and calf guards, and they still feel as good as my new sets.  I don’t know how other brands perform (having only tested out new items), but believe this durability to be excellent. They are only showing minor signs of wear with a little bobbling on the insides of my calves where my foot occasional drags across the other leg. Given that I always wear them on the same sides, you could half this wear effect on the calf guards by swapping them over every other run. 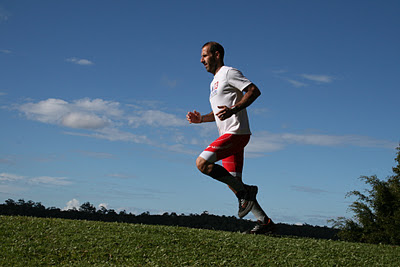 So if we assume that the compression benefits are equal across different brands it comes down to 4 things:

The Look – Now I’m not sure that you could say that compression gear looks sexy, especially shorts and tights, but personally I think the Linebreak long shorts are different from the other brands and look pretty good.

The Comfort – Of all the brands I have worn I find the Linebreak to be the most comfortable whether they’re new or you’ve done 100’s of KMs in them.

The Durability – As I’ve mentioned already I’ve done a lot of KMs in mine and they are still in great shape and performing well. The tights which I have run over 1500KMs in are in better condition than a pair of Skins tights that I have only ever worn to sleep in as a recovery aid.  I did have a couple of stitches give on a pair of Linebreak shorts when I first put them on, but this did not impact the compression capability, and 1000kms on and the minor damage hasn’t spread or got any worse.

The Cost – This is aligned with durability as together they constitute value. When compared to other brands Linebreak are not just a little cheaper, but significantly so, with frequent special offers and bulk discounts amplifying this effect.

So to sum them up the Linebreak gear does the job it’s designed to very well, and at a very affordable price.  I’ll be honest and let you know that when compression gear first exploded onto the running scene I thought it was just another fad, but have been converted.  I’m really happy with my gear and can’t imagine running without it now.

Sadly there are still some people out there who perhaps, for the sake of the rest of us, have a look in a mirror before they venture out in their compression kit :)


Check out my other Ultramarathon Running Gear Reviews