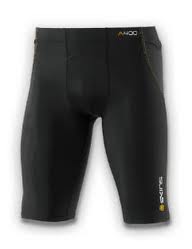 to try out. Now I’ve always been a bit sceptical of compression gear as I’ve not had any conclusive proof as to their benefit. So I took this as an opportunity to be a bit more scientific and satisfy my own personal curiosity as I'm looking for any advantage I can get for my 1400km run this August.

Basically I ran for a week in my non compression gear and then repeated that week’s training wearing the A400 running shorts to see what differences I could determine. So what did I discover?

Firstly I have to comment on their packaging as they have the most fancy box for running gear I've every seen, which is probably a significant part of the cost for these!

That aside the first thing I noticed with these was the fit. Clearly a lot of thought has gone into these as they were very comfortable, and cater for gentlemen well, allowing sufficient room for the boys without raising the tone of your voice a couple of octaves! That said, even for compression gear, they were very snug. I had the right size for my height and weight, and yet I felt that they should have been in a size bigger. I don’t know if this is a design feature to be that tight as they aren’t uncomfortable.

What I did notice whilst running with them when they are so tight, especially on fast downhills is how effective they are at restricting lateral movement of the muscles. This must be a good thing as it reduces micro tears in the muscles, and lends itself to more efficient muscle recruitment.

I found that they wicked sweat away very well, especially on the front of the thighs were there was the most air movement.  I’d even wipe sweat from my forehead on to them to help cool my legs, which felt more effective than wiping it on bare skin.
But these aren’t the sort of reasons to make you want a pair, what really counts is the effect on performance.

It’s commonly accepted that Compression wear aids a speedy recovery, by engaging the same processes invoked by an ice bath, assisting venous return of blood. I had always thought of this as a benefit whilst resting or overnight, as I have often slept in compression tights after an ultra to aid recovery with reasonable results.

What I noticed with the A400 when compared to a hill session with traditional shorts was the short term recovery benefit. When doing either 1km trail repeats or 400 road hill repeats I found that by the time I had returned to the bottom of the hill my legs felt fresh as if it was my first rep. Over the course of the set each repeat certainly got harder, but with the A400 the muscular tiredness didn’t kick in until further up the hill, than running in traditional shorts.

As a follow on when comparing the with and without sets I found that I managed 1 extra repeat on the 1km trail hill, and did the same number of reps but if felt easier on the shorter steeper road set (it was a few degrees cooler, but I also had my full pack on, so in general these factors should balance out).

Now there are many variables I didn’t take into account such as nutrition, sleep, resting HR, weather, etc so you wouldn’t exactly call this is truly scientific study. However, as with all things running it is about experimentation and finding out what works for you. The thing I take away from this is that I would and do wear them as I believe they help. They are not cheap, which is their biggest negative, but it comes down to your goals and how important they are to you. For me it is all about being able to get up day after day and run, and anything which help my recover y and improves my performance, even if it is just in my mind, is a good thing. Given that this is such a mental sport, it really comes down to what you believe and whether it is placebo or not, it doesn’t matter. Every time I’m running I’m always trying to trick my brain into thinking that “It doesn’t hurt” or “You’re doing great”.


Check out my other Ultramarathon Running Gear Reviews