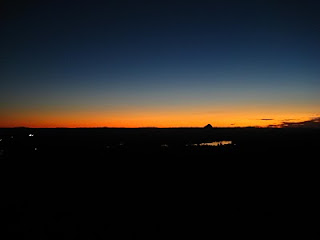 Today with my training I actually took some of my own running advice after reading my previous post (An Old Ultra Running Saying).  I realise that I had got myself into a rut with my training. Looking back I’d done over 100kms this week without a long slow distance run, just 5 similar runs of about 20kms each.

So I decided to ditch my back hydration pack

and just run with a couple of water bottles, and to go for a (relatively) short fast run, a kind of tempo session but faster.

To push me along I set off for the top of Mt Tinbeerwah about 30 mins before sunset. This is a 7km run to the top with a 250m+ vertical climb along forest tracks. I knew that I would be pushing it for daylight on the return leg, which was just the sort of non-negotiable motivation I needed.

I actually surprised myself when I set of around 4:30min/km pace, not something I’ve done since my road marathon days, and certainly not on this sort of terrain. I felt really good, and was springing over rocks and branches, the same ones that I hit on every occasion yesterday morning with tired feeling legs.

In the last km to the top there is a stretch of road before you have to scramble over rocks to get to the lookout.  There was a car hub cap in the middle of the road which I put to one side (I’ll come back to this later).

When I reach the top there were 5 people sitting down enjoying the scenery, conversation and a glass of red. They were a little surprised to see me, and more surprised that I’d run all the way up, not just the last few hundred metres from the car park.  I hadn’t planned to stop for more than a minute, but enjoyed their company, and the offer of a glass of wine (which I refused on the basis of my own safety running back in the dark).

I had all the usual questions about what I’m training for and the shocked responses when they hear that it’s for 100mile races. The conversation continued and I mentioned a charity that I have run for previously, and that I have a big event scheduled for 12 months time where I’ll be raising funds for SIDS and Kids again. These guys were just great, so interested in what I was doing, genuinely supportive of what it was about, and so prepared to share their food and drink. It was very tempting to have finished the run there and then, joined them for the rest of the evening, tuck into a glass or two of wine, and accept their offer of a lift home.

Anyway, it turns out the hub cap from the car was theirs, and it was a hire car, so they were doubly happy to have recovered it saving a massive penalty fee. I said I would pick it up and rest it against a post on the layby a little further down the track.  As I left one of the group came over to me, reached into his wallet and gave me all the notes he had for the charity run I had told them about.

This absolutely blew me away.  The generosity and kindness of these people towards me and what I stood for was heart warming.  With an extra spring in my step (which is dangerous when running over bare rocks in the dark and no torch) I departed to such positive, encouraging and flattering comments that 3 hours later and I still have a great feeling inside.

The return leg of this session was very different. I had hoped to run fast, but it was just too dangerous on most of the track as it is steep, and covered with loose rocks and roots. I effectively ran the last 5kms in pitch darkness, having to look up to the gap in the trees to get an idea on the turns from what little of the night sky I could make out. On the steep sections I adopted the style of a small child pretending to be an aeroplane, with arms spread wide for balance. The rest of the time was like running by Braille, having to sense the changes in the surface with my feet and adjusting my gait almost instantaneously to avoid a tumble.

Amazingly I got home unscathed. I really must take my torch with me next time.

The point is that the variety in the run and the experience I had with the people I met just re-energized my running. I’ve increased my training significantly of late and was starting to get stale. This is just the tonic I needed.

So a big thank you to my friends at the summit, sorry I didn’t get your names.  You have given me faith in the human race, and I now have a far stronger belief that I will meet the $50k target for SIDS and Kids over the next 12 months.