followed by frequent trips to running shops to get the latest “essential” running gear.  Some of these things are a one off, lifetime purchases, and others seem to be an ongoing financial burden replacing consumed or worn out kit.

Of course when you do find something you like and that improves your performance (if only psychologically) it’s very difficult to run without it.

This will be the experience with most runners and joggers in the case of shoes.  We’ve all found a style of running shoes that we are comfortable and swear that you will only ever buy these shoes again.  We’ve also be brainwashed by the shoe manufacturers from all the research we’ve done in the running magazines that you should replace your shoes after a few hundred kilometres (even less if you’re on the heavier side like me). The reasons being given are that the cushioning and support is no longer sufficient to prevent injury after this sort of use. You would think with all the research and improvements they make that a shoe could be made to last a bit longer.

So in response to the emotions roused through fear of getting an injury which could cause a long lay-off, we head off to the running shop to protect our future running career. The trouble is when the next season comes along the shoe you like is no longer available, and has been replaced by an “improved” model with more science and technology, and often a higher price!

Of course the next time you find a shoe that you like you end up buying 2 pairs as you know it is unlikely to be available next time you clock up the prescribed mileage. This is a deliberate marketing strategy by the shoe manufacturers, and a highly effective one at that.

The trouble is there is very little you can do about it, especially when you are training for ultramarathons clocking up hundreds of kms every few weeks. When training for road marathons I had only one pair of shoes that I would actively use, with a spare pair in case the others were wet or otherwise not ready to use. After a bit of experimenting with Saucony

and had numerous pairs of versions 7 thru to 11!

Ultra running on trails has changed this and even though I still have 2 pairs of ASICS for back up, I now have 4 pairs of The North Face Arnuva Boa 50

’s. The most recent pair I bought I believe were the last pair available in Australia, having trawled the web to find them (as they are no longer manufactured). Proof of the marketing strategy in operation again.

The thing is if I were to replace my shoes as often as recommended I would be spending most of my free time in running shops! My attitude towards replacing shoes regularly changed significantly after reading “Born to Run

” by Chris McDougall, and I introduced some barefoot running to my training.

Since reading that I took the generic orthotics out of my shoes to actually reduce the cushioning, and strengthen my feet. This had the added bonus of creating a larger toe box, and saying farewell to black toenails. I also intend to keep wearing the same shoes until I can no longer keep them on my feet! So far, and that’s over 1200kms since I made the decision (and 1500kms total for the shoes), I have suffered no ill effects from running on what the manufacturers would call utterly worn out shoes. 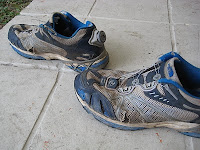 Sure I’ve had to replace the laces once, which is unusual give the Boa lacing system, but then I’ve taken them far beyond their designed lifespan. The treads on the soles have pretty much worn flat, but this only becomes a problem for very short stretches of trails under wet conditions, so I just adjust my style to reduce slipping (not 100% effective I’ll admit, but cheaper than new shoes and more fun!). The upper has seen better days, but there’s plenty of life in them yet.

So I say when it comes to buying new shoes, vote with your feet, not through fear.  If you’re running OK in “worn out” running shoes then don’t change them. If it’s not broken, don’t fix it, and you can save yourself a few dollars too!

“The difficulty lies not in the new ideas, but in escaping the old ones which ramify, for those brought up as most of us have been, into every corner of our minds” – John Maynard Keynes